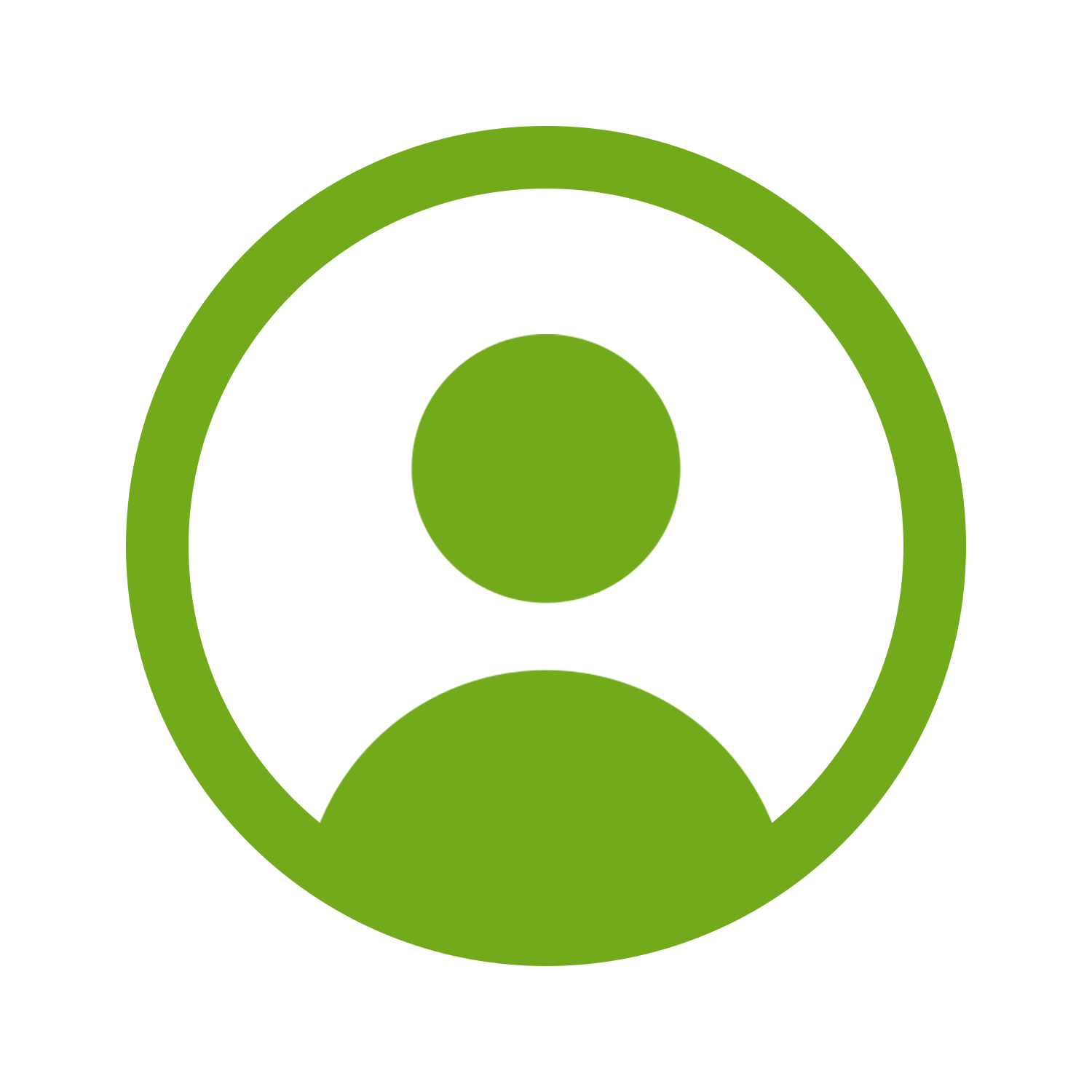 Forced outages and planning for repairs were causing major issues for a 1300MW power plant located in Maysville, KY. Like most plants, this Kentucky plant had always used conventional hand-held, Non-Destructive Testing methods to prevent tubes leaks. However, undetected wall-loss, causing critical boiler tube leaks, led to forced shutdowns all too often. These shutdowns caused the Kentucky plant to re-think traditional hand-held maintenance methods; which often resembled looking for a needle in a haystack.

The plant reached out to Gecko Robotics hoping they could help take the guesswork out of their inspections. Since partnering in 2017, they have been able to target specific wear patterns and degradation rates to predict and prevent forced outages. 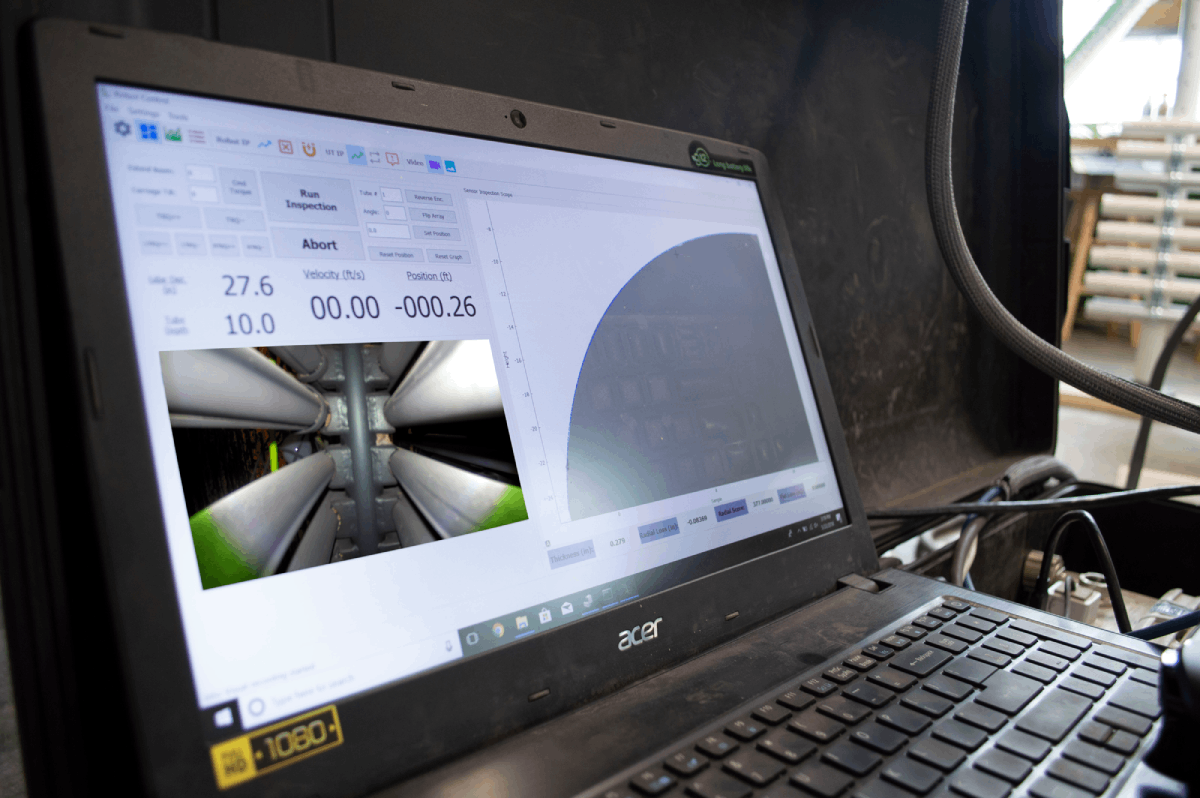 Gecko Robotics performing an inspection with the TOKA robot on the north coutant slope of Unit 2. 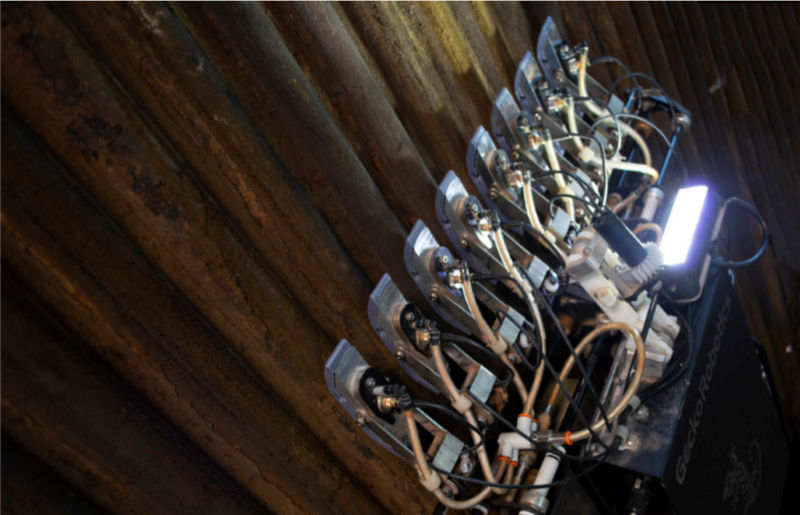 Gecko’s TOKA 3 robot is a wall climbing robot with eight transducers, speed of 60 feet per minute, and HD visual camera.

In February 2017, the Kentucky plant had a tube leak in the lower furnace “coutant” slope of their 550MW, CE, tangentially fired, pulverized coal boiler. The failure mechanism was outer-diameter tube wastage due to slag/ash erosion where the slope bends upward (vertically) to form the front wall. The team hired a well-known, traditional Ultrasonic Testing (UT) company to survey the critical areas, in order to get a baseline measurement of tube conditions.

The boiler was back online within a couple of days after the manual UT inspection, but was down again due to tube leaks in March; just under a month after the first leak. The tube leaks occured in the same area.

At this point, a senior engineer at the plant knew the pressures associated with unit reliability and was in full data-collection mode. He had already scheduled Gecko Robotics to perform their UT inspection in an upcoming Spring planned outage. Knowing Gecko could be onsite in under 24 hours, he decided to bring them in for the Unit 2 forced outage.

Within hours from the call to Gecko Robotics, two inspectors and one robot were deployed to the Kentucky plant, ready to act as soon as the workday ended for the plant's employees. Once in the boiler, and working at the boiler throat, Gecko’s robot climbed the slopes with 8 ultrasonic transducers and an HD visual inspection camera. The robot, TOKA 3, climbed the walls at 60 feet per minute all through the night shift. By the end of the shift, TOKA 3 captured over 2 million thickness readings; previous manual UT methods had only captured 500 thickness readings.

Results from day one

As the senior engineer walked back into the building the following morning, he was presented a deliverable showing 99.6% more data than the manual survey. Gecko’s deliverable revealed a large number of critical areas in need of short-term repairs. In addition to the immediate benefit of the vast data set, the Kentucky plant was able to develop a plan of action for future repairs. With long lead times on parts and equipment, planning with Gecko’s deliverable was a huge advantage for future maintenance during planned outages.

The boiler was able to come back online while plant employees continued to study the Gecko deliverable, giving them further insights about unit maintenance and efficiencies. “The Gecko Vision map made it possible to define a clear scope of work. We [were] able to use the map to justify an entire slope replacement for the fall of 2017.” - the senior engineer stated. 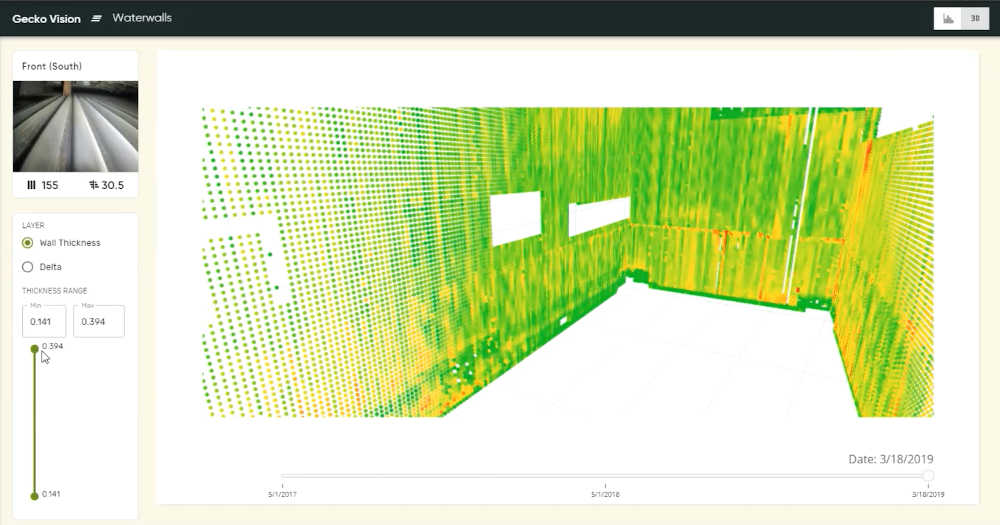 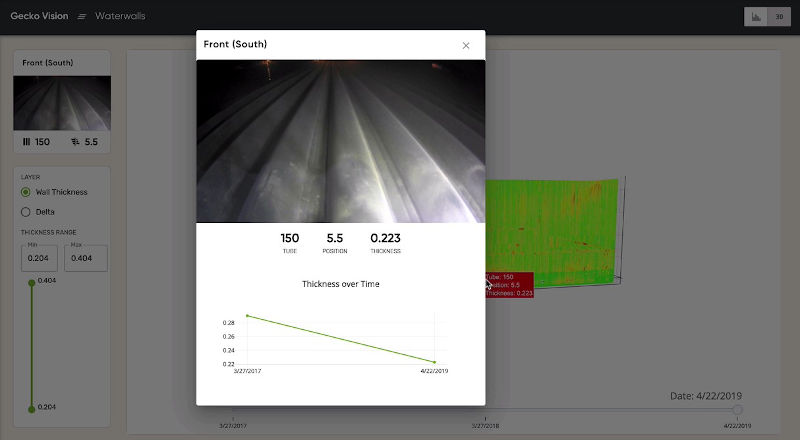 Gecko’s software and portal, left, organizes and displays data in a visual thickness map, as well as a downloadable excel document with thickness readings. HD visual’s, right, are available for each area

Since March 2017, the Kentucky plant proceeded to work with Gecko Robotics for all four of their boiler units and other equipment around the plant. “The robotic UT survey was pivotal to understanding the extent of the total damage,” the senior engineer commented. “This information supported a short-term repair scope that permitted the unit to operate up to the fall outage when the slopes were replaced. The inspection data allows us to control the total coverage and cost.”

Decisions and overall preventative maintenance are now more seamless in the Kentucky power plant. Information is power, and at this plant, data, speed, and forward thinking were the difference in millions of dollars saved.

“Planning work in a power plant is a difficult challenge,” the senior engineer explains when describing the flexibility and speed of Gecko’s technology. “Ultimately, the speed at which [Gecko Robotics’] technology can acquire data, along with having the inspection information displayed on a user-friendly portal, allows us to quickly interrogate the data and gain confidence when making run/repair/replace decisions.”

Thank you! Your submission has been received!
Oops! Something went wrong while submitting the form.
Chat With Us

Thank you! Your submission has been received!

Oops! Something went wrong while submitting the form